Capable of reacting to changes in the production environment and able to reprogram themselves autonomously, they are an appreciable and indispensable innovation in the packaging lines 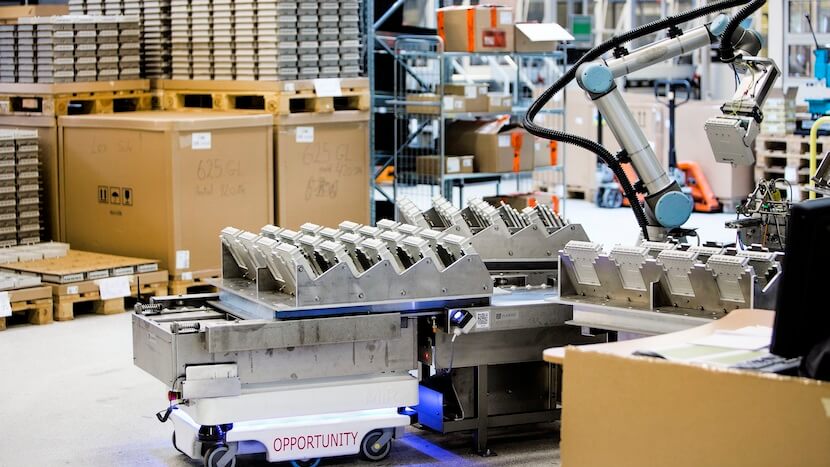 The autonomous mobile robots (AMR) are essentially the evolution of the automatic guided vehicles (AGVs) and are efficiently used in the replenishment of packaging lines and other production tasks. Let’s find out together what they are in detail in this interesting article.

What has changed from an AGV to a more sophisticated AMR?

Autonomous mobile robots are very different from traditional AGVs and have in common with them the sole function of transporting materials from a point X to a point Y. The innovation of AMRs lies in the consistent expansion of their on-board intelligence: AGVs can only obey simple programming instructions, following fixed paths through sensors, magnetic strips or cables. And if the path of the structure where the production lines live is changed, which happens frequently, changing the guides of the AGVs is expensive.

AMRs are flexible because they navigate through maps that their software builds on site or through preloaded plans of structures. Autonomous mobile robots use data from cameras, integrated sensors and laser scanners, as well as sophisticated software, to detect their surroundings and choose the most efficient path to the lens. With these navigation prerequisites, their implementation, even in dynamic and constantly evolving structures, is easy and economical because it only requires a map. As a result, an AMR can be implemented in a few hours and quickly readjusted in case of changes in the production environment in which they are placed.

But that’s not all. Able to react to changes in the production environment and to reprogram themselves autonomously, AMR can calculate alternative routes if obstacles such as people, pallets or forklifts appear in front of them. This optimizes productivity by ensuring that the material flow remains on schedule.

Where are AMRs indispensable?

AMRs are critical to modern manufacturing environments, which require the agility and flexibility to make changes to products or the production line. Autonomous mobile robots are highly adaptable for production in structures of any size. If production cells are moved or new cells or processes are added, an updated building map can be quickly and easily loaded, or the AMR can re-map directly on site, so it can be used immediately for new tasks. This capability offers organizations a complete and flexible use of the robot and its functions, which is not possible using the AGV infrastructure.

The ability to work independently makes AMR much more adaptable than AGVs. The AMR only needs simple software changes to change tasks, so the same robot can perform a variety of tasks in different locations, automatically making the necessary adjustments to meet production requirements in different environments.

How are mobile robots used in the packaging industry?

No, not at all, and indeed they value the work of staff who can perform tasks of higher value than moving goods from one place to another. Mobile robots thus prevent people from carrying out transport activities within production, warehouse or packaging environments and allow workflows to be optimised.

Since robots are collaborative, they can work as partners with their human counterparts to increase productivity levels. For example, thanks to mobile robots, companies avoid bottlenecks between production and packaging. Usually, when staff manage internal transport, products are grouped into small batches per shift because the transport must be actually completed, but this affects the flow of production and packaging. Robots can deliver 24 hours a day, 7 days a week.

If well constructed, safety is safeguarded from every point of view. In the event of a person stumbling in front of the robot MiR (Mobile Industrial Robots, a leading manufacturer of collaborative mobile robots), a laser vision scanning system is able to interpret the obstruction quickly enough to redirect the robot or stop it to avoid a collision. It is a Category Three, Performance Level D safety system and uses a laser scanner, PLC and safety relay to feed the planning algorithm data. MiR robots are able to recognize obstacles up to 15 meters away and go around them, or they can make a safe stop so as not to bump into or injure anyone. Other types of collaborative mobile robots may have other behavior parameters but the logic remains the same as described for MiR robots.

What is the speed of a mobile robot? Does it depend on what it is carrying?

The speed can be mapped depending on the characteristics of the production environment and the route. To give some examples, let’s always consider some MiR models: the MiR100 can move at a speed of up to 1.5 m/s, the MiR200 at 1 m/s while the MiR500 reaches up to 2 m/s. The speed does not usually depend on the weight of the objects being transported.

Are there any short-term sales forecasts?

IFR (International Federation of Robotics) data estimates that sales of AMR and AGV in production environments will increase by 333% until 2020 and AMR figures are expected to be by far the highest.

Notes to the header image: in the photo there are MiR robots. The photo is taken from the site www.packagingobserver.com

Do you need to implement or improve your production line?

Since 1964 we are in the packaging sector, Farmo Res is at your disposal for any information. Call us at 0544-981900 or write to us at info@farmores.com