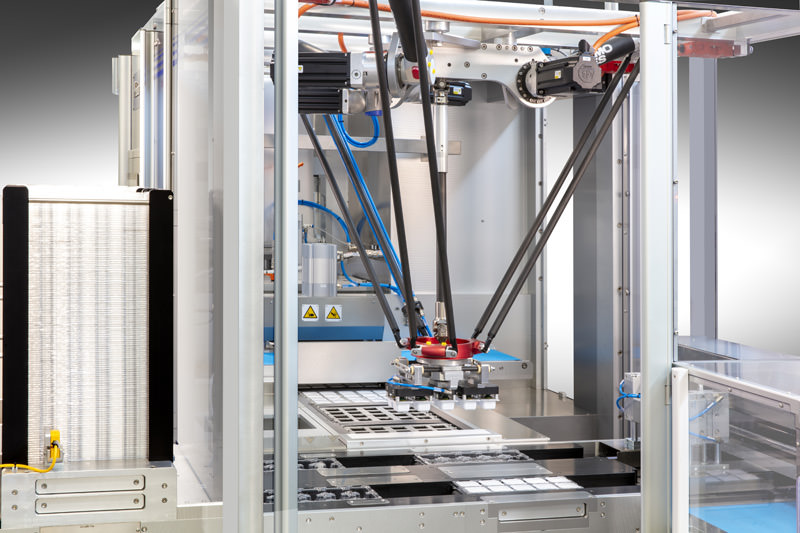 In recent years, packaging lines have become more and more popular, and robots are often required. Choosing the right robot, which allows precise and fast handling, is important above all for production efficiency. Farmo Res, thanks to its technicians, always finds the most suitable robot for the different needs of its customers.

The machine on which we most often integrate robotic technology is our automatic thermoforming machine Prima K7, an excellent solution used for the production of PET, PVC and polystyrene trays for packaging syringes, vials and bottles. In a recent application we integrated a dozen robots. But the Prima K7 is a transversal machine that is also used in other industries, such as food, where it is widely used for packaging single-dose food products.

But how to choose the robot?

Choosing and customising the robot or several robots in one application is not an easy task. The starting point is undoubtedly to understand as precisely as possible what the robot is to do. This may seem trivial, but it is not. At a conceptual level, the robot’s task is almost always clear, but when it comes to the operational details, the variables to be quantified create quite a few complexities. The main variables to be defined when choosing the robot can be:

Defining these variables is in any case the task of our Farmo Res technicians who, through ad hoc questionnaires, will receive from the customer the necessary details for the choice, installation and customisation of the robot. In our opinion, it is highly inadvisable to rely on suppliers who propose robotic mechanics solutions based on generic data because, over time, you will find yourself facing an inevitable series of problems.

The characteristics of the robots we install

Independence from the controller and the possibility of total integration, together with reliability and performance efficiency, are the main prerogatives. But the most important aspect is to be able to rely on mechanics that can carry out their actions using the same electronics as the machine, without the need to integrate a different control unit and interface. Our robots are thus an integral part of the machine. The range of solutions that we can integrate is very wide, ranging from more than 200 models divided into 3 to 5-axis robots, dual-pods, anthropomorphic robots, hygienic design versions and other special versions, all independent of the controller and able to work at any stage of packaging.

Whatever your needs, Farmo Res will find the solution.

Since 1964 we have been building machines with the best technology that we sell all over the world. Contact us